Menopause is a natural condition that all women will experience in their lifetime. The term menopause describes a constellation of changes that generally occur in a woman’s fifties or sixties, with the symptoms of change often becoming noticeable in her forties. During this time, the ovaries stop producing eggs, menstrual cycles become less frequent and eventually stop, and estrogen and progesterone decline.

The hormonal decline that occurs with menopause causes uncomfortable symptoms that lead many women to seek relief. Relief is rumored to exist with a steady soy diet or acupuncture, but hormone replacement therapy (HRT) is known as the most effective. Many women, however, live in fear of hormone therapy, questioning its safety and the impact it will have on their long term health. 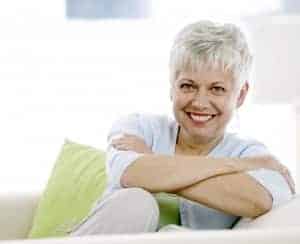 This fear stems from the results of the 1991 long-term study on the safety and efficacy of hormone therapy, known as the Women’s Health Initiative (WHI). The study tested synthetic, or traditional, hormone therapy on postmenopausal women. One branch of the study, which compared the effects of estrogen-only therapy with estrogen-progestin therapy, had to be halted early in 2002 due to adverse health conditions that developed among many of the subjects.

The subjects of the study were limited to postmenopausal women, with a combined average age of 68 years old. These two factors are significant – most of the women studied had been in a state of hormonal decline or complete loss of hormones for fifteen years or more, putting them at-risk for the development of diseases that estrogen, progesterone and testosterone might have prevented if administered earlier in their lifespan.

Relief from Symptoms of Menopause through BHRT

Bioidentical hormone replacement therapy (BHRT) is a safe and effective means for women to find relief from symptoms of menopause. There are individual and combination therapies available, along with a variety of delivery methods. Physicians specializing in BHRT will assess your needs through detailed lab testing to determine which hormones and delivery methods are right for you.

Estrogen
Estrogen is notoriously the female hormone. For women, it is linked to many, functions that impact beauty and function. Low estrogen often causes diminished sex drive because the vaginal walls become thinner and drier when this hormone is lacking – making intercourse painful. Orgasms may also become more difficult to achieve and less intense. Reduced estrogen causes a reduction in collagen – which is responsible for building skin and connective tissue – leading to thinner, drier and wrinkled skin

Progesterone
Progesterone has a host of functions inside the female body, regulating a symphony of other hormones: estrogen, testosterone, cortisol – without it or with low levels, wellness is undoubtedly threatened. Progesterone serves a function in the central nervous system, producing calming effects and impacting memory and cognitive ability. Progesterone also works in conjunction with estrogen to help regulate the action of the cells that form new bone and downplays the effects of mineral corticosteroids, such as cortisol. This effect makes it pivotal in reducing water-retention and bloating. Bioidentical progesterone performs these same functions, while progestin (the traditional form) exclusively regulates the menstrual cycle and exacerbates side effects of having an imbalance of progesterone.

Testosterone
Believe it or not, women need testosterone too – generally in lower quantities than men, but it is necessary. In women, testosterone plays a role in sex drive, building and sustaining lean muscle mass and managing mood swings. There are many options for testosterone replacement therapy including oral capsules, injections, creams, gels and pellets. Some women experience greater declines in this hormone than others

Many women toil over whether or not to pursue hormone therapy as their bodies approach menopause. It can be a difficult decision, especially with all the media headlines and fears instilled from previous studies, like the WHI. Fortunately, experts and researchers have continued to pursue in-depth studies and analysis on hormone therapy and the results yield good news for women.

In March 2011, the medical journal, Menopause, published the findings of The California Teachers’ Study (CTS), a long-term analysis surveying, measuring and observing the effects of hormone therapy – traditional or bioidentical. The subjects, 71,000 retired female teachers between the ages of 30 and 90, were followed for nine years. The CTS study revealed that women aged 34 to 59 experienced a decreased risk of heart disease with the use of hormone therapy, while women aged 70 to 84 saw no increase in heart disease risk. In comparison to the WHI, the results were consistent – women of the WHI study, aged 50 to 59, also experienced a decreased risk of heart disease, while those not receiving hormone therapy experienced an increased risk.

A November 2011 study, also published in the journal, Menopause, took a closer look at the effects of discontinuation of HRT at varying points in the lifespan. This study analyzed the bone density of 50,000 women who were either on HRT or had discontinued use. These women were followed for more than six years, during which time researchers observed a 55 percent increase in hip fractures among women who had discontinued HRT. Even more alarming was the steady decline of bone density observed each year for women who did not return to HRT. The WHI also showed that women taking non-bioidentical estrogens had a decreased risk of hip fractures.

Dr. Jennifer Landa spent 10 years as a traditional OB-GYN, and then became board-certified in regenerative medicine, with an emphasis on bio-identical hormones, preventative medicine and nutrition. She is the author of “The Sex Drive Solution for Women.”