What’s the Risk of Gaining Weight?

What’s the Risk of Gaining Weight? 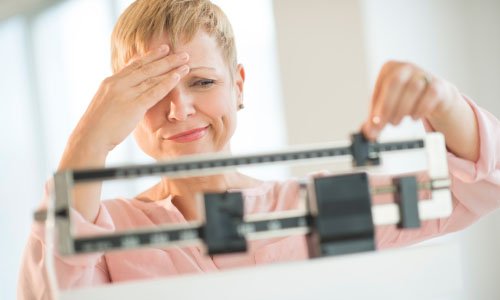 According to a new study reported in the peer reviewed journal Climacteric (3), investigators suggested that hormonal changes and resulting weight gain due to menopause is characteristic for central or abdominal obesity in addition to a substantial increase in the total body fat stores. This shift in the metabolic physiology has several physical and psychological implications; such as:

Some degree of weight gain is inevitable with menopause and physiological aging; however, abnormal shift in the body mass index (BMI) can be prevented or managed by physician-superviced medical weight loss programs.

Identifying the cause of weight gain

The first and foremost step in the management of metabolic issues and weight gain is, identification of the primary cause. As discussed previously, with physiological aging, the rate of secretion of several hormones decreases that may lead to weight gain; however, it is very important to learn if the effects are due to the deficiency of estrogen, progesterone, testosterone, thyroid or any other hormones.

Look for viable options to replace the natural hormones:

If the deficiency of a key hormone is causing abnormal changes in your body and altering your quality of life; you should seek medical help in order to restore the natural hormonal balance.

A new study conducted by Davis and associates (3) suggests that estrogen replacement aids in restoring normal body weight and physical energy levels; without needing any other weight loss intervention. The study also suggested that hormone replacement also reduces the risk of medical and metabolic health issues that are associated with poor quality of life in menopausal women.

Dealing With Hot Flashes and Night Sweats During Menopause
November 15, 2022
Go to Top