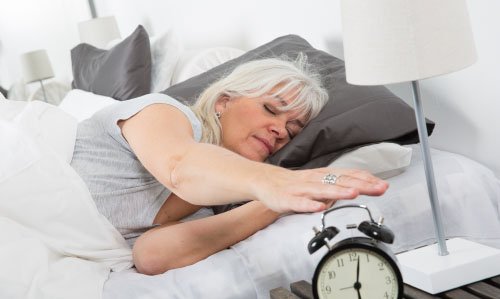 Menopausal fatigue is characterized by general pain in the muscles that is often accompanied by a persistent feeling of tiredness, low stamina, anxiety and poor energy levels. According to a new study reported in the peer reviewed journal Menopause (1), investigators suggested that 60% of women experience fatigue and low stamina after achieving menopause.

It has been believed that fatigue is generally a result of low oxygen tension in the tissues which activates the anaerobic responses in the muscles and lactic acid accumulation. This causes pain and irritation and normally follows after long hours of physical activity. Unfortunately for most menopausal women, this is a persistent gnawing feeling (even at rest or with no activity). The deficiency of oxygen in the menopausal women is attributed to hormonal imbalance (especially declining estrogen and testosterone production).

Persistent fatigue is often associated with:

What are notable causes of Menopausal Fatigue?

Deterioration in the production and serum concentration of various reproductive hormones is the primary pathophysiological cause of menopausal fatigue. The effects of hormonal imbalance and resulting fatigue are mediated by several mechanisms:

1. Negative changes in the quality of sleep:

Improper sleep is responsible for decreasing the restorative energy in the body. It is imperative to mention that approximately 55 to 75% menopausal females report some degree of insomnia or sleep difficulty. Following are some of the reasons that may lead to sleep difficulty due to menopause and in turn increased fatigue

2. Hormonal dysregulation due to estrogen deficiency:

Impaired production of estrogen due to menopause can directly alter the biochemical balance of reproductive as well as non-reproductive hormones that may deteriorate metabolic balance. For example, secretion of hormones like cortisol increases in menopausal women (thereby promoting fatigue and feeling of tiredness).  This is mainly because estrogen helps in regulating the levels of cortisol in the body. With substantial decline in estrogen, the feedback control on the cortisol is lost, resulting in heightened fatigue, mood disorders and depression. Additionally, high cortisol levels can also deteriorate the effects of hormonal replacement therapy as suggested in a study reported in the peer reviewed journal Neurobiology of Aging (4). In simple words, the positive effects of endogenous or exogenous estrogen are adversely affected if serum cortisol levels are high.

Long standing or poorly managed stress can also lead to tiredness or fatigue. Some sources of stress include work-related stress, relationship stress, and a sedentary lifestyle that may further decrease quality of life by stimulating the release of stress hormones (such as cortisol) in the body.

It is very important to delineate and differentiate menopausal fatigue from secondary causes such as chronic diseases, poorly managed metabolic conditions etc.

Other than menopause fatigue can also represent many other diseases such as:

How to improve energy levels after menopause

Experts suggests that lifestyle and diet modification helps a great deal in improving the overall energy levels and stamina after menopause. A few tips to reduce the fatigue and tiredness associated with menopausal hormonal changes are:

These lifestyle modifications can help in improving your quality of life. However, if you are still experiencing severe menopausal fatigue that is interfering with your quality of life, you can always opt for bioidentical hormone replacement therapy – a holistic solution to restore the hormonal tranquility.

The Physical changes during menopause
October 11, 2022
Go to Top